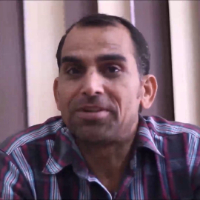 Manoj did his schooling from Uttar Pradesh. He achieved a black belt in karate in 1993 and has attained many degrees in karate full contact and Tong II Moodo since. After this he did his graduation from Agra University. Following which he worked as a martial arts trainer in the Border Security Force from 1994 till 2005. He then returned to Dehradun and opened his martial arts academy called Sri Shanti Samiti . Ever since then he has been giving training in martial arts.

What is Martial Arts / What is a Career in Martial Arts: Many forms such as karate, Judo, Taikwando, kung fu, kick-boxing come under martial arts. Martial arts are practiced for a number of reasons: as an art form, as a game, as self defence and protecting others. it trains you to learn to protect yourself even when you are empty handed.

Martial Arts Course / How I got into Martial Arts: "I did my schooling from Uttar Pradesh. I achieved a black belt in karate in 1993 and have attained many degrees in karate and Tong II Moodo since. After this I did my graduation from Agra University. Following which I was selected by the Border Security Force as a martial arts trainer in 1994. Until 2005 I did my Job at the BSF and then returned to Dehradun and opened my martial arts academy called Sri Shanti Samiti . Ever since then I have been giving training in martial arts."